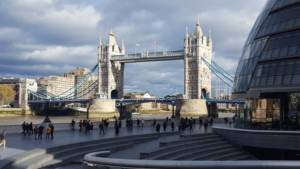 Yes unfortunately I don’t have a big photo for this book. I am having picture sizing issues cuz I am not a techy. But I love this image as one to associate with Neverwhere. You see the tall and ancient bridge juxtaposed against modern architecture. Showing only 2 of the many worlds of the city of London. None of them matching each other, yet somehow they co-exist in one place. London, is a great setting for this book because those of us who know the city… And I survived the IRA bombing that ended the cease fire in 96, in London. They took down the building next to the one I was standing in. I was traveling with friends as part of a school group. The building next to our hotel went down, I was in my hotel room. Certain noises still make me nausious because they remind me of that event. So I am familiar with London above. Which has architecture from so many ages jumbled often together sometimes quite disjointedly. Then there is below the city. The tube, is a world of it’s own behind a glass. Then there are the catacombs below London, and the sewers and other systems… Not to mention that London, is built again in every age on top of what was there before, since the Neolithic age. I love that Neil Gaiman, decided to play with some of that idea and it found it’s way into this fantasy adventure tale.

As a group, most of us really enjoyed reading this book. We had a nice adventure. It was a bit juvenile, a little boy’s fantasy. but the twists and turns were very interesting. The concept was intriguing, the comparison it seemed of the hobo populations in every major city to “falling through a crack in reality,” was well made. I wish he would make a tarot deck based on this book. The Hobo’s Tarot. With an aesthetic of the London streets and an underworld of people who have fallen through the cracks of society. I think it would be interesting. This book struck me as a tarot card reading almost. Traveling through the minor arcana to the major arcana only to learn it’s inverted.

London below is made up of many factions. The rats, the Marquis De Carabas, Velvets, and so very much more. All these characters are rich and well done, though for me some depth was missing. I think the author missed an opportunity to give his characters character when it came to names by opting to give them functions instead. Then naming them for their function. I noted this in a movie too of a different Neil Gaiman book that we saw as a club… It caused me to wonder if he knows his mom has a name other than mom. Either way, she clearly read him The Lion The Witch and The Wardrobe, one too many times… He did stay away from weirdnesses such as “sons of adam and daughters of eve,” nonsense. That much I was grateful for. I still have nightmares about the Lion The Witch and the Wardrobe, due to such strange wording of things. So it was appreciated that Neil Gaiman, was able to dump the parts of the book he clearly read 1 too many times for his own work.

I want to say this was original. But I don’t feel like it really was. It was an over complicated good verses evil age old somewhat cliche standard, set in an interesting and somewhat magical and fantastic setting, removed from reality into a world unlike any I have ever experienced before. And I wonder, if he had chosen to write something more nuanced if it would have ruined the book, in that with nothing recognizable there is nothing for the reader to recognize and latch onto. So perhaps that choice was in fact an act of brilliance. I just can’t decide.

It was a wild ride that included a pair of Disneyesque bad guys, like the bumbling robbers of Home Alone, very cheeky and funny. Very humorous. But somehow they still managed effective evil and violence unlike their Disney archetypal counterparts. I wonder if I would have been able to read this book had they not been so ridiculous. I might not have ever slept again had they not been painted this way… I also love the depiction of violence and evil as ridiculous. At one point the Marquis De Carabas, even shares his thoughts on violence… Truer words were never spoken. Not in London above or below.

What a roller coaster! This was a fun ride. So my grattitude to Mr. Gaiman. The worlds that live in his head…. Just amazing. I am in awe.

This may not have had the deepest characters, it may have read a bit like a little boy’s fantasy and had some issues with cliche and taking the bite out of the evil characters…. But what a wild ride and what a commentary on society. Not just that, the way it pulled in the urban legends of so many cities around the world and the monsters living down in their sewers…. That much was a pure stroke of genius. The twists he put on the good verses evil concept, were also well played.

Is this my favorite book? No. I don’t think so. But I sure did enjoy the ride and had trouble putting it down as did we all. Even it’s negatives were positives. I would very much like to sit down and pick the brain of someone that carries worlds around inside his head. Would love to study with him.

I try to write sometimes myself. not just blog posts. I try to write novels. I enjoy it. But I don’t think I will ever get far. As you can tell, I am probably not the best writer and who really wants to read the worlds I carry in my head? They are nowhere near as interesting as the worlds of Mr. Neil Gaiman, how much I would love to take a writing class from him though. It would mean so much to have a chance to learn from him in any capacity. This is another writer I would very much like to talk to, but I can’t imagine ever being lucky enough to get the chance.

So thank you for this novel. It was…. An experience. A very interesting and loaded experience, a ride more wild than the one Mr. Toad went on. This book is far deeper than it seems and buried within it in layers like the city of London, is the nuance that seems somehow to be lacking… Neil Gaiman, is a wizard.

Thank you for reading
Amanda of Wildflower Farm